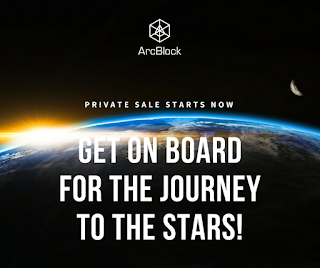 Blockchain Latest Technology Released on ArcBlock.
Blockchain technology of Bitcoin succeeded in dominating the cryptocurrency market for nine years since the rise of BTC in 2009. When the first launching, bitcoin was less appreciated by investors, but over time, the existing blockchain technology used by Bitcoin attracted the attention of researchers in financial technology. So the newest Blockchain Technology emerge applied to Ethereum. Ethereum has Smart Contract services, which is why many people are interested in the features provided by Ethereum. If Bitcoin uses version 1.0, then Ethereum can be said to use blockchain version 2.0 and, Blockchain Technology will be released in ArcBlock version 3.0. The technology of this latest, ready to replace the previous technology.

ArcBlock is a service platform that combines Blockchain v 3.0 technology with Cloud Computing. Blockchain This new version is created not from the team or developers of ArcBlock, but this blockchain is formed by ArcBlock community. Teams and developers only help kick-start this technology, the rest of the community that controls the market. The ArcBlock platform also allows developers to develop and deploy decentralized applications using the best blockchain. With ArcBlock, developers can also create their own custom tokens that inherit all of the features of our native token ABT. In the near future, ArcBlock’s ArcBlock application developers have built and deployed the applications with ArcBlock.

ArcBlock is a computing platform for developing and deploying blockchain applications, Ethereum is a blockchain technology. They are related but are very different. Comparing ArcBlock to Ethereum is like compare Apple to Orange.
To achieve high-performance transactions, we built an optimized blockchain dedicated to ArcBlock’s own token services and the public ledger. The design goal is to achieve >100,000 Tx/s, which is more than adequate for a wide range of applications. In the future this blockchain could be improved for broader purposes.

ArcBlock is present to solve complex problems often experienced by older blockchain users. Mass adoption of this technology, causing some systems require an update to meet the needs of the public. Some problems with older versions of blockchain include declining performance. The old version of blockchain performance can not meet the needs of the community to cause overload transactions. An example is the Ethereum network that was once attacked by CryptoKitties that caused a transaction to take up to 2 hours and a fee charged to the sender of almost USD 10 per transaction. This is a public complaint lately.
High cost is also a major problem in previous version blockchain. One transaction using Bitcoin costs 0.001 BTC. While the current BTC rate is 14k USD, that means once a transaction, a person spends 14 USD. While Ethereum average charge fee from 1 USD to 5 USD (if condition of network is normal).
With the presence of ArcBlock, all transactions will take place in seconds with a very small fee, ie no more than 1 USD.

To solve the problems that are being experienced by the public, especially developers. Then ArcBlock will come with a variety of services, features and advantages. Among others are :

Built For The New Token Economy

ArcBlock is not led by a centralzied agency, but the ecosystem or token economy is in control of the growth of this platform. The team from ArcBlock Foundation Limited only kick-started against this platform, the rest for ArcBlock platform growth will be fully formed by communities and ecosystems.

Optimized For The Best Experience

Some blockchain technologies, present only to meet the needs of the blockchain itself, regardless of user needs. ArcBlock will be very accessible via Mobile Phone and Website for desktop users who have been wanting easy access. With an easy-to-understand UI, ArcBlock will provide the best experience for its users. That way, all the developers will feel more helpful.

Built For The Cloud

ArcBlock is designed to run natively in the cloud. It can also run on a single computer for testing and development. This design principle makes ArcBlock fundamentally different from many other platforms in the blockchain world. In ArcBlock, a node can be a “logical computer” comprised of one or more virtual machines, or a group of cloud services working together as a computing environment. This approach marks a significant step forward that will help elevate blockchain and decentralized applications to the next level, including our patent pending technologies.

Built With An Open Standard

ArcBlock is built with an open standard. We’re trying our best not to reinvent the wheel and to build for the application developer’s wants and needs. In addition to open sourcing our core components, we will also actively contribute to a variety of blockchain technology communities.

What are the main components in ArcBlock?

Our open source protocol provides an abstract layer for accessing underlying blockchains. Similar to an ODBC or JDBC interface to a set of databases, our Open Chain Access Protocol enables your application to work on different blockchains. There’s no need to alter your business logic or work with multiple chain technologies. Chain Adapters can be built by the community and encouraged by the incentive mechanism. This will enable ArcBlock to support many blockchain protocols and continue to improve.

Blocklet is a serverless computing architecture component for running various types of applications. Use Blocklet for smart contracts, oracle, resource and asset handling, and off-chain business logic. Blocklet communicates with blockchains through ArcBlock’s Open Chain Access Protocol, and can be orchestrated with our Algorand-based consensus algorithm. Anyone can use Blocklet to build services and components and contribute them under the incentive system. Community members will receive tokens when others use their contributions.

A distributed messaging system supports pub/sub and acts as an API gateway for Blocklets. ArcBlock’s gateway uses a decentralized design and secure communication channels. Your applications will run in both web browsers and mobile apps, giving users reactive, real-time experiences. The gateway supports various network protocols by default, including WebSocket, DDP, HTTPS, and MQTT. Advanced developers can extend the gateway with new network protocols to fit their needs.

While ArcBlock’s core components weren’t designed to handle media and assets, Blocklet can be used to handle them with support from other systems. Blocklet can also help you create off-chain data, or verify off-chain data with the on-chain data. . Today, most decentralized applications handle media and assets with off-chain logic. They either use a cloud-based centralized solution like AWS S3 or Microsoft Windows Azure’s storage service, or a decentralized solution like IPFS or Swarm.

ArcBlock provides libraries and frameworks for client application development. These libraries support web, iOS, and Android platforms. With the Electron Framework11, the web version can be easily encapsulated and packaged as a desktop application for Windows and Mac OS.

ArcBlock is among the first blockchain startups to adopt Algorand12 in production. Algorand was founded by Silvio Micali, winner of the 2012 ACM Turing Award. Micali is a pioneer in cryptocurrency and blockchain technology. He was instrumental in the development of many of the building blocks of cryptography, published works on game theory and Byzantine Agreements, and even launched a micropayments startup. When Micali saw Bitcoin, he thought it could be improved; Algorand is the result of that quest.

ArcBlock holds ICO (Initial Coin Offering) in order to provide an opportunity for investors, especially cryptocurrency communities who want to support the ArcBlock project to be truly formed. ArcBlock sells ABT Token as a medium to raise funds. Funds collected will be used for the establishment and evolving project of ArcBlock. In the coin offer period, ABT Token is an ERC20 token from Ethereum. This is done to prevent as kick-start to create a Token with its own wallet.
Some information that can be known to those wishing to participate in ArcBlock ICO is as follows:

As a pioneer in changing blockchain technology for the better, ArchBlock is in desperate need of support for the latest version of Blockchain to be properly formed. Support from the cryptocurrency community greatly affects the greatest change in subsequent decentralized technologies. ArcBlock will make a major change to the obsolete blockchain technology. With the establishment of ArcBlock, all developers and cryptocurrency communities will experience the best experience with the latest technologies.

Website | ANN Thread | Whitepaper | Telegram | Twitter
Disclaimer : I am not part of a team or a developer. if you have any questions, please go directly to the telegram discussion and ask directly to the team or developer
Created by : bayu7adi
https://bitcointalk.org/index.php?action=profile;u=1103069