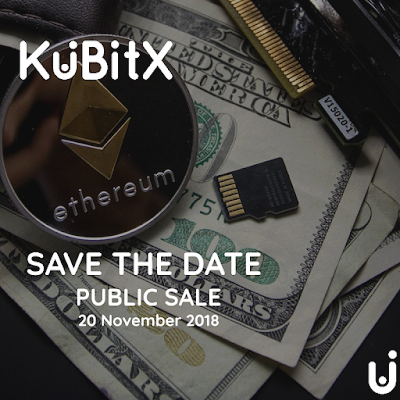 Since I wrote an article about ICO, there are a lot of projects regarding exchange. The majority of project exchanges have indeed managed to attract investors’ attention in raising funds because the role of exchange is very important for cryptocurrency marketing purposes including bitcoin, altcoin and new coins. But recently the exchange project did not offer a significant difference. Users still get buy and sell features such as existing exchanges.

KuBitX is a centralized cryptocurrency exchange that aims to offer different features than other exchangers. KuBitX works with several financial organizations to make it easier for users to trade pairs with FIAT Currency. Supported by a very good team experience, from several well-known companies such as Google, Dell, Huawei, Amazon, etc., I think this can be a valuable capital to be able to develop the KuBitX project properly.
KuBitX chose to be a centralized exchanger because now the features and services of a centralized exchanger are better and more varied. This is one of the main attractions for users who prefer centralized exchangers rather than decentralized exchangers. For comparison, Bittrex which is a centralized exchanger has more features and layers of security that are better than EtherDelta, which is a decentralized exchanger. Support services are always a consideration for users in choosing an exchange.
But KuBitX will not replicate the footprint of Binance, Bittrex, KuCoin, Okex and other centralized exchanges. KuBitX will be a revolutionary exchange that offers different services than the usual exchange today. Collaboration with several banks and financial companies, makes all users of KuBitX who are new users and experienced traders can easily transact using the FIAT currency. As we know, that Binance does not provide transaction services using FIAT, so that most people have difficulty in withdrawing to each user’s local bank account.
For additional information, the MVP of the KuBitX Product has been released. The team from KuBitX claims that the exchange platform will be able to process transactions of up to 12 million transactions per second.

The business model of KuBitX can also explain how the official token from KuBitX, namely KBX Token, works. Following is the business model of KuBitX
The first is that the KuBitX platform gets a producer of Trading Fee generated from users. Each user will be charged a 0.05% trading fee which I think is a very cheap fee. If you imagine when I make an exchange with around 10,000 USD, the platform will charge only 5 USD. In addition, for those of you who use the KBX Token to pay a fee, you will only get a discount of 25%. So you will only pay 0.0375%.
Then the second business model is, KuBitX charges a withdrawal fee when a user makes a withdrawal to a local bank. A fee of 2.5% will be charged as a fee withdraw to a local bank. Users will not need to bother to convert money to a local exchanger first. And this is the most simple step in serving users.

ICO is a fundraising that is not regulated by official agencies with the aim of providing an opportunity for investors from the cryptocurrency community to provide support for related projects. KuBitX ICO sells KBX Tokens that want to have KBX Tokens at low prices, which I have explained above, that the use of KBX Tokens is to get special discounts to pay trading fees. The following is the KBX Token Sale information that I got
KBX Token is a token with type ERC 20 which is a token based on the Ethereum network. The number of tokens sold is 260,000,000 KBX. The total supply of KBX Tokens is 500,000,000 KBX. Price of 1 KBX = 0.056 USD. The currency that can be used to buy KBX Tokens is ETH. The minimum contribution is 0.25 ETH. The softcap from KuBitX ICO is 10,000 ETH and Hardcap which is likely to be obtained is 25,000 ETH. Unsold tokens will be destroyed. The Public Sale will take place on November 20, 2018 until December 19, 2018.
For those of you who are interested in becoming investors from KuBitX Project please visit the website of KuBitX at http://www.kubitx.io/
Stay connected and get the latest updates from KuBitX
Website | Whitepaper | ANN Thread | Telegram | Twitter | Facebook
Publisher : bayu7adi
Personal ETH Address : 0x77259B80B0b7EcBfb7bAaA675b9026fD3765F789